The Rufous-vented Ground-Cuckoo is a beautiful but infrequently encountered bird, and one of the most sought-after species of the Neotropics. It is found in humid primary forests from southern Nicaragua, through Costa Rica and Panama, into north-western Colombia.  Another population occurs in the western and southern Amazon Basin of south-eastern Colombia, eastern Ecuador, eastern Peru, northern Bolivia and Brazil, while a final population occurs in the Atlantic Forest of eastern Brazil. The Rufous-vented Ground-Cuckoo is an obligate antswarm follower, meaning that it forages by following colonies of army ants and picking off the insects, arachnids, and small vertebrates like lizards and frogs that the ants disturb as they swarm across the jungle floor. An interesting fact is that ground-cuckoos of the genus Neomorphus produce a sound by clacking their beaks, which is similar to that produced by peccaries (wild pigs) when they feel threatened. Ground-cuckoos may occasionally be spotted near peccaries, so it has been proposed that they both benefit from alerting each other to danger by making similar sounds!

As other species in the genus Neomorphus, the Rufous-vented Ground-Cuckoo is generally highly inconspicious and infrequently seen.  While overall unlikely to be threatened due to its large range, one subspecies, maximiliani (from Bahia, Brazil), may be extinct, and another, dulcis (from Rio de Janeiro and Espírito Santo, Brazil), is very rare and likely to be threatened.  The subspecies vary primarily in the details of the chest- and crown-pattern, and the colour of the tail and wings.

This “holy grail” of Neotropical birding has been recorded from the world-famous Pipeline Road near the Canopy Tower, but chances of seeing it are better near the Canopy Lodge. Dr. Kevin Zimmer (renowned international birding tour leader and researcher) wrote for the magazine Neotropical Birding that “in recent years, perhaps the most reliable place for seeing Rufous-vented Ground-Cuckoo has been the foothill forest above El Valle de Antón, Coclé Province, Panama, particularly near the grounds of the Canopy Lodge,” after he was able to watch this bird for about 45 minutes around a swarm of army ants with our Canopy Family guides. 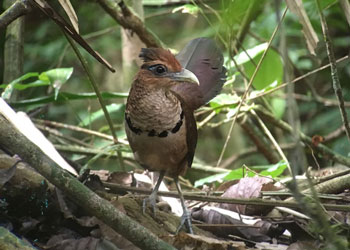