Our largest motmot! The Rufous Motmot is a common bird found in the understory of the lowland and foothills forests of Panama. With a length of nearly half a meter, and its bright orange-rufous head, large black mask and green-blue back and tail, it is one impressive bird! Sexes are similar, and the female is slightly smaller than the male. The Rufous Motmot is similar in appearance to the much smaller Broad-billed Motmot, but the rufous color is brighter and extends nearly all the way down to its lower belly, and it lacks the green chin. Its long tail sports the characteristic racquet tips of most motmots, and it often “tick-tocks” its tail from side to side like a pendulum when disturbed. The Rufous Motmot is the second largest of all motmots, and arguably the most spectacular of the family.

Rufous Motmots are typically solitary but occasionally seen in pairs. They perch quietly for long periods of time – they are low-energy specialists, sallying out from the perch to catch prey in the air or on the ground. Their diet consists of insects, arachnids, crustaceans, small vertebrates and fruit. The larger motmot species tend to consume a higher proportion of fruits than smaller motmot species; fruits are generally plucked while hovering in mid-air, and they frequently visit the fruit feeders at the Canopy Lodge. They are also sometimes seen foraging at army ant swarms. They are rather vocal, especially at dawn and dusk – the morning dawn song is a variable series of quick, warbled hoots, and is often a chorus with several individuals. Their typical call is a deep, haunting, resonating rapid “boo-bup-bup,” usually three notes. When more than one individual is calling, an “echo” effect is produced. They are also known to make a loud chatter when agitated or during aggressive interactions.

Rufous Motmots prefer primary or mature secondary forest, and prefer to be near water. They tend to avoid dense, vine-tangled secondary growth where Whooping and Lesson’s motmots are more common. They are territorial, however not much is known about their territoriality; pairs call back and forth, especially at dawn and dusk. Territorial disputes between pairs are settled by vocalizations. Courtship rituals likely involve leaf and fruit offerings. Like other motmots, Rufous Motmots nest in burrows on banks. Burrows are excavated themselves using their feet (by both male and female), or refurbished old nests may be used. Burrow entrances are usually wider than high, and often have 2 grooves in the dirt leading to the opening from the birds going in and out of the nest. The burrow is up to 3 to 5 meters long, and often curved inside and leading to an oval-shaped nest chamber. There is limited knowledge about their breeding ecology; however, what is known seems rather consistent with other motmot species. The average clutch size is 3-5 white, spherical eggs. Both male and female participate in incubation of eggs and feeding of nestlings. Nestlings are altricial, and feathers begin to grow a few days after hatching. Juveniles are similar to adults but smaller.

The Rufous Motmot is common in the lowlands and foothills (to 1400 m elevation) along the entire Caribbean slope in Panama, and on the Pacific slope from western Panama province eastward to Darién. This large motmot can be found from Honduras and Nicaragua to western Ecuador, western Amazonia, Peru, Bolivia and northwestern Brazil. The Rufous Motmot has two subspecies – B. m. semirufus, found in Central America and northwestern South America, and B. m. martii, found in the western Amazon basin. The main difference between the two subspecies is that B. m. martii lacks the racquets on the tail.

Local names: In Panama, the Rufous Motmot is known as “barranquero” and “guardabarranco,” referring to the nests it builds in banks. 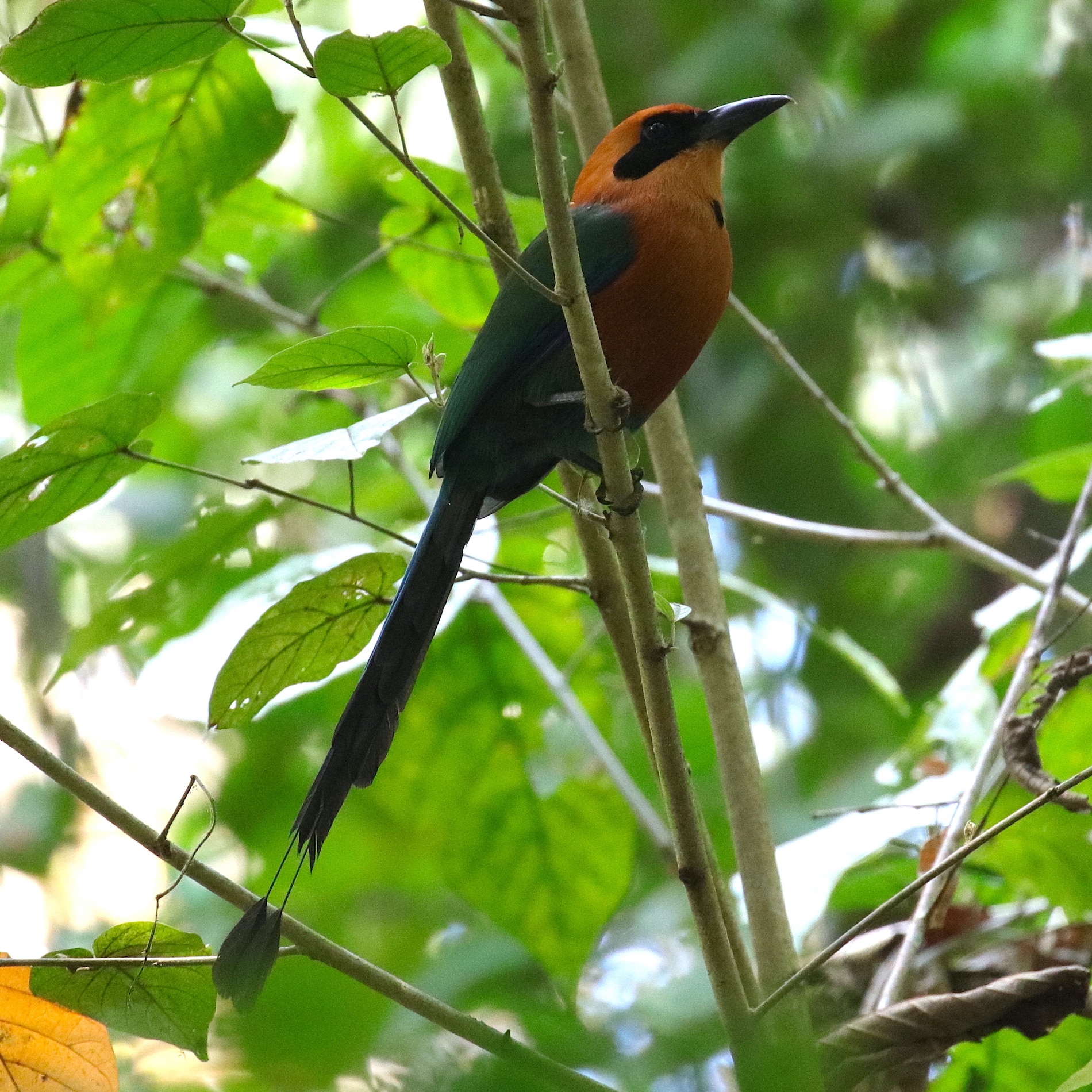