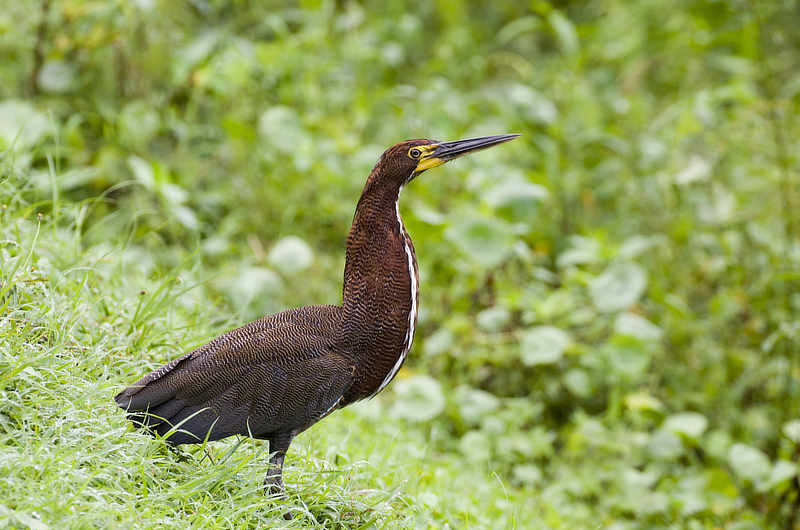 The Rufescent Tiger-Heron is one of several beautiful and iconic herons of the Neotropics.  At 68 cm tall, this fairly large heron has a bittern-like appearance, with a wide neck, heavy bill and short stubby tail.  It is distinguished from the other species of tiger-herons by its rich rufous-chestnut head and neck with very fine barring near the body and a conspicuous white stripe from the throat to belly, gray-brown back and wings with fine vermiculations, buffy-brown belly and vent, and barred white-and-black flanks.  Males and females are not sexually dimorphic.  Immatures are heavily barred with black and buff showing a “checkerboard pattern”, especially on the lower neck, back and wings.  Immature Rufescent Tiger-Herons and immature Fasciated Tiger-Herons, their close relative, are almost identical, and habitat is the best way to distinguish the young birds (the latter is more common along moving streams in the foothills). Adult plumage is attained at 4 or 5 years of age.

The Rufescent Tiger-Heron is generally solitary and inconspicuous.  It spends most of its time staying very still and is a patient predator—standing and waiting until an unsuspecting prey comes close when it will lash out its long neck and grab its prey with its powerful, spear-like bill.  Its prey consists of aquatic animals—fish, crustaceans, arthropods—and it is often seen catching its favorite food, freshwater eels.  It gives a low hooting call, a pair of notes, often at night.