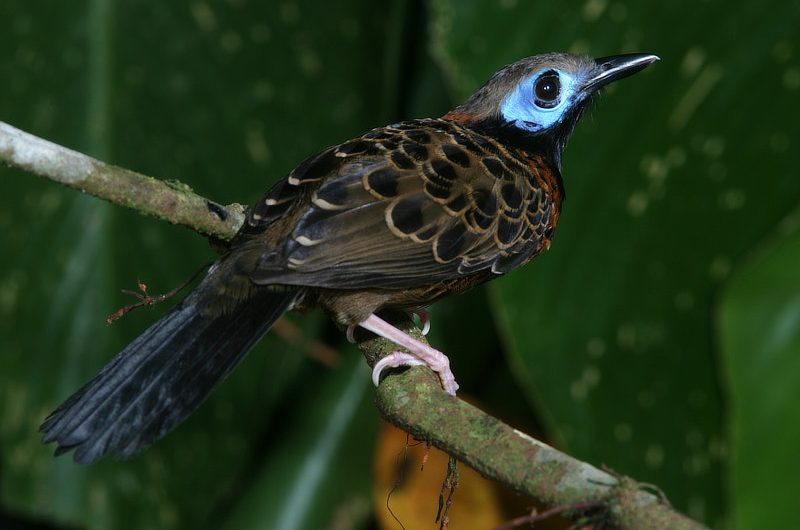 A flashy, most-desired member of the antbird family (Thamnophilidae), the Ocellated Antbird is a denizen of the understory of lowland rainforest, where it is almost exclusively found in the vicinity of large swarms of army ants. At 19 cm in length, it is a large antbird and has a particularly striking appearance—it is olive above and rufous below, except that each individual feather is centered with black, giving it its distinctive scaly (“ocellated”) look. It also has a black throat, a bushy gray crest, and extensive blue facial skin. Strong, pink legs complement this antbird’s attire. It is fairly long-tailed and long-bodied and has a proportionately small head. Males and females look alike, and juveniles are similar but lack the blue facial skin of the adults.

Finding an army ant swarm in the lowland tropical rainforests of Central and South America is like winning the jackpot for a birder. A large swarm may have dozens of individuals of several bird species attending, and the Ocellated Antbird is one of the most prized attendees. Like other antbirds, the Ocellated Antbird feeds not on the army ants themselves, but on the insects and arthropods, and occasionally small lizards, flushed out by the ants’ movements. It is an “obligate” army ant follower, and seldom forages away from Eciton burchellii ant swarms. It is dominant at army ant swarms over other attendees, and is almost always in the company of Bicolored and Spotted Antbirds. Since army ants are nomadic, Ocellated Antbirds follow ant locations and check their bivouacs daily to keep tabs on them, and also take cues from each other’s vocalizations and group knowledge to detect new swarms. At ant swarms, the Ocellated Antbird perches on branches and lianas close to the ground, often clinging to vertical stems, and moves from perch to perch looking for prey being flushed at the front of the swarm. It will fly down to the ground to snatch a prey item then fly back up to a perch to eat. It often pumps its tail up and down. It visits multiple ant swarms per day, and has a feeding range up to 50 hectares. Its presence (and thus one of the telltale indications of a nearby ant swarm) is signaled by its song, a rising series of high-pitched piping whistles, often falling off at the end. This species has a complex variation of calls and vocalizations, and sometimes snaps its bill in territorial disputes.

Ocellated Antbirds are monogamous and mate for life. The male’s courtship display consists of a loud song as he delivers food to the female. The Ocellated Antbird’s nest, only recently scientifically described, consists of an open cup located close to the ground. Eggs are whitish with reddish-brown spots and streaks. Both parents incubate and feed nestlings and fledglings. The young begin to forage at swarms at approximately 3-4 weeks of age, and are independent by 6 weeks. Young birds may stay in the family group for up to 6 months before dispersing. Female offspring disperse sooner than males; males often stay and breed locally in the area of the parents, and may continue to forage together as a family group.

Primarily found in Central America, the Ocellated Antbird ranges from southeastern Honduras to northwestern Ecuador, where it is found in mature lowland and foothills rainforest up to 900 m. It has a strong preference for primary forest. In Panama, it is uncommon along the entire Caribbean slope and the eastern half of the Pacific slope. It is one of our most sought-after birds on Canopy Family tours, with the famous Pipeline Road near the Canopy Tower usually offering the best chances for a sighting. 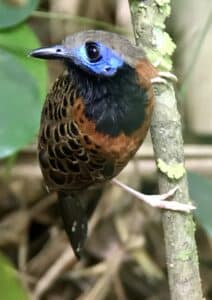