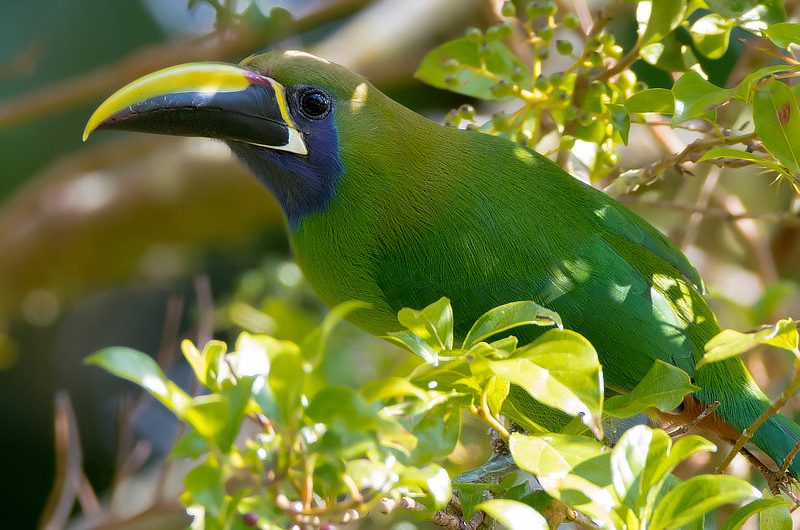 The Northern Emerald-Toucanet is a small toucan found in the foothills forests of Central America from Mexico to far-eastern Panama. At only about a foot in length, it is our smallest toucan in Panama. Its bright green plumage gives this species its name, and this colorful plumage is characteristic of its genus. In Panama, the Northern Emerald-Toucanet has a blue or purplish throat, chestnut-colored undertail coverts and rufous tail tips. Its bill is black and yellow. Individuals found in western Chiriqui near the Costa Rican border have a red spot at the base of the bill, whereas eastern Panama birds lack the red spot. The Northern Emerald-Toucanet has up to 8 subspecies which show different throat colors (white or blue/purple) and differences in bill patterns, with differing extent of yellow on the upper mandible. Subspecies also differ mildly in size.

The Northern Emerald-Toucanet is a bird of the forest canopy – it forages in small flocks of up to 10 individuals among the canopy for fruits and small vertebrates. It is quite a generalist – over 113 species of plants are reported in its diet in Costa Rica alone! However, it has a special preference for berries. It also eats vertebrate prey, including eggs and nestling birds, small lizards and snakes. Arthropods, including spiders, centipedes, grasshoppers, beetles, butterflies and moths, flies, bees and wasps are fed primarily to nestlings. It is often first detected by its call, a series of low, frog-like croaks that can continue for minutes. It is quite vocal, and other vocalizations include barking calls. It frequently cocks its tail while calling. It has direct flight with rapid wingbeats, often with a short glide at the end. It can be found in a variety of habitats, including forest edge, foothill montane forest, plantations and clearings with scattered trees. It will roost in tree cavities, but uses different cavities for roosting than nesting. Raptors are the main predator of this small toucan. The Northern Emerald-Toucanet is the best-known species of the genus Aulacorhynchus with a vast majority of its life history observations and data coming from Costa Rica.

Like other toucans, Northern Emerald-Toucanets nest in tree cavities. The breeding time varies depending on the location; breeding is recorded from March to August in Costa Rica. Th nest cavity is anywhere from 2 to 27 meters above the ground. They are secondary cavity nesters, meaning they use a cavity that is already created, such as an old woodpecker cavity or natural cavity. Cavity entrances are generally oval in shape. The clutch size is 3-4 white eggs (however, 1-5 eggs have been recorded). Incubation begins after the second egg is laid, and the eggs are incubated for 16 days by both the male and female (the female averages more time on the nest than the male). Males also participate in brooding and feeding the nestlings. Young receive both fruit and arthropods to eat, and fledge in 42-45 days.

Well-disguised: The Northern Emerald-Toucanet, despite its bright coloration, has excellent camouflage. The emerald green color blends in perfectly with the forest canopy foliage.