Similar in appearance to its close cousins, the Northern and Southern River Otters, the Neotropical River Otter is 90-150 cm in length—its long, tapered tail makes up one-third of its full length. The Neotropical River Otter has short, shiny, dark grayish-brown fur, lighter around its muzzle and throat. Its muzzle is short and broad, with powerful jaws for feeding on mollusks and crustaceans. It has small ears, short legs and fully webbed toes. It weighs 11-33 lbs, with males up to 25% larger than females. Neotropical River Otters are members of the family Mustelidae, which includes weasels, badgers, grison, tayra and wolverine.

Neotropical River Otters are semiaquatic and typically solitary, and can be found in a wide variety of riverine habitats, preferably with clear, fast-flowing water within forests, savannahs, llanos and Pantanal. Neotropical River Otters are the greatest generalists among all otters. They are versatile in their habitat selection, and are tolerant to environmental change, being found in wastewater areas, rice plantations, swamps and even marine environments. They feed on fish, mollusks and crustaceans, and occasionally small mammals and birds, and much of their habitat selection is dependent on the abundance of food in the area. They are primarily diurnal, but sometimes can be active after dark. Graceful and fast swimmers, they are often seen swimming with just their heads popping above the water, or on occasion, basking at the water’s edge. The Neotropical River Otter communicates via scent markings and a variety of vocal whistles and screeches.

Neotropical River Otters den in burrows on banks. Den location is dependent on fresh water, food availability and deep, wide bodies of water. The entrance to the den can be above or below the surface of the water, and dens are variable in their composition, shape and size. Cavity material varies depending on the available habitat, and includes rocks, tree roots, burrows and caves. They breed once a year, and young are born in dens. The gestation period is 56 days, and young emerge from the den at about 52 days old and begin swimming at about 74 days. Litter size ranges from 1 to 5 pups, but 2 is most common. The young remain with the mother for an extended time. While male-female pairs are occasionally seen, the males are not involved in parental care. Females are responsible for raising the pups and keeping them safe, as they can be predated upon by other Neotropical River Otters.

The Neotropical River Otter is listed as Near Threatened by the IUCN. Pressures include illegal hunting, habitat destruction for mining and ranching, and water pollution. In the past, it was heavily hunted for its fur, causing major population declines from 1950-1970.

The Neotropical River Otter is the most widespread Lontra species, found throughout most of Central and South America and Trinidad, from northwestern Mexico to central Argentina. It is mostly found between 300 and 1500 meters in elevation, but is known to occur in high-elevation lakes and streams up to 3000 meters in the Andes. There are several described subspecies. Neotropical River Otters overlap in range with the much larger Giant Otter, but competition is low between the two species due to differences in habitat preferences, size of prey taken and abundance of prey.

Despite its wide range and habitat preference, the Neotropical River Otter is uncommon to rare. Its presence can be detected by finding fecal remains deposited conspicuously on rocks and logs, containing a large proportion of invertebrate exoskeleton. Tracks and scat are sometimes seen along small streams. In Panama, this species is found in the Panama Canal, rivers and bodies of water around Gamboa not far from the Canopy Tower, in the forest streams near the Canopy Lodge, and in rivers in Darién near the Canopy Camp.

Local names: Neotropical River Otters are commonly called “water dogs” throughout their range. In Panama, they are is locally known as “nutria,” not to be confused with the Nutria (also known as the Coypu), a rodent similar to the muskrat and beaver, that ranges into the southern USA. 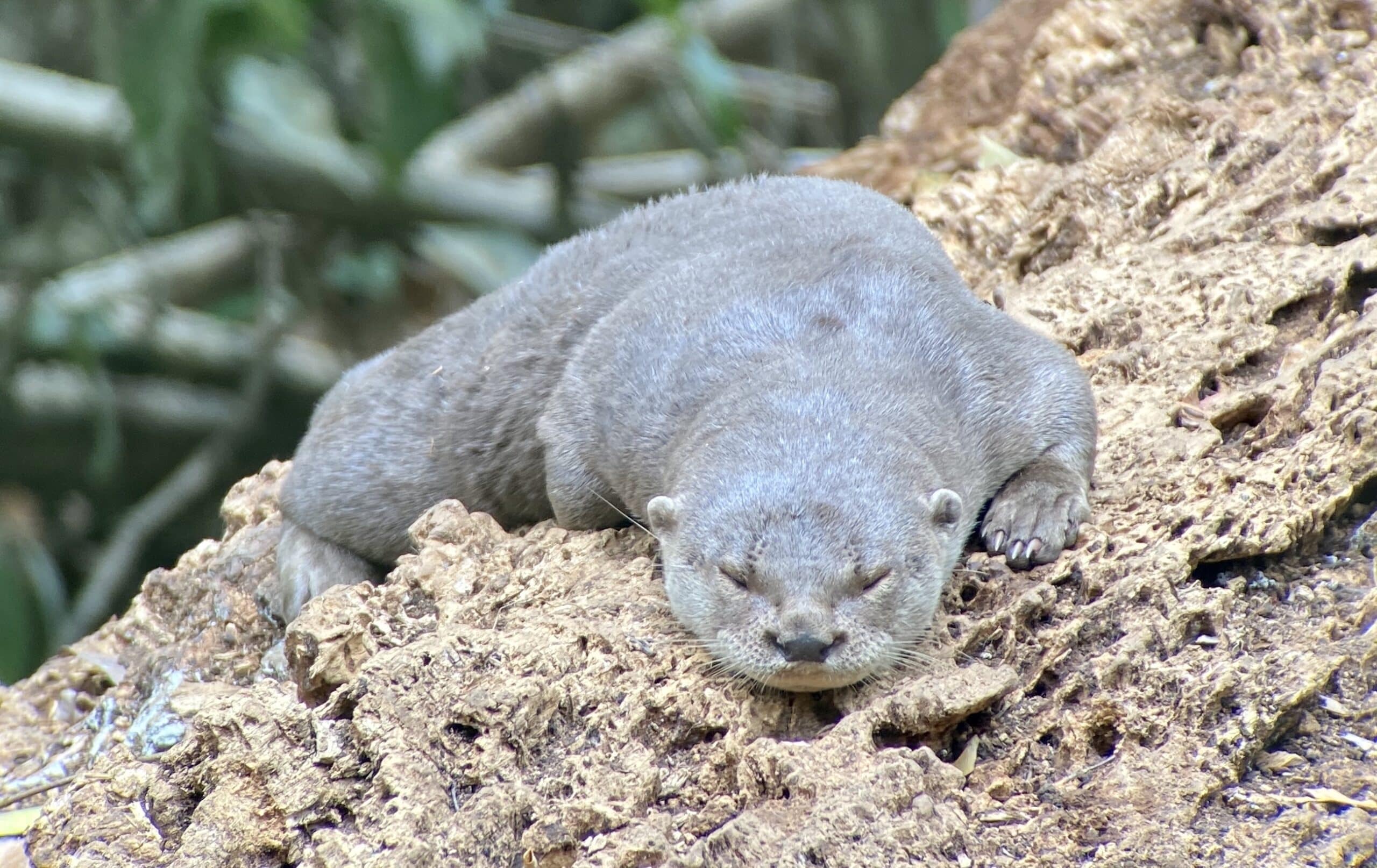