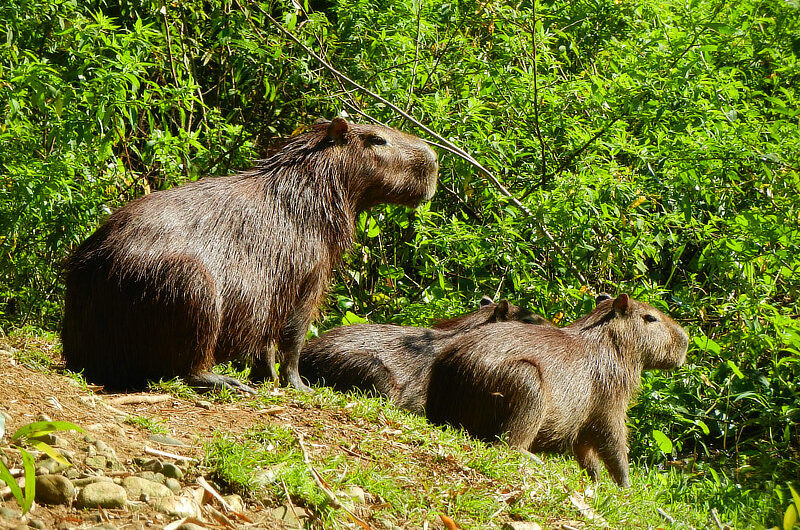 The semiaquatic Capybara (Hydrochoerus hydrochaeris) of South America is iconic as the world’s largest species of rodent. Perhaps less familiar is the other species of capybara, the Lesser Capybara, which occurs here in Panama. In most physical and ecological details the two species are similar, except that the Lesser Capybara is noticeably smaller, weighing in at just around 28kg compared to its 50kg cousin. While the Capybara inhabits a vast swath of South America east of the Andes, from Venezuela south to Argentina, the Lesser Capybara is restricted to parts of Colombia and Venezuela west of the Andes as well as the eastern half of Panama, where it constitutes the northernmost capybara population.

The Lesser Capybara was first reported as inhabiting Pacific river valleys in Panama, from Tuira in Darién as far west as Cabra near Panama City, in the 1940s. Since then it has been observed to have colonized suitable wetland and waterside habitat along the Chagres River and the Panama Canal, including small islands in Gatun Lake such as Barro Colorado, as well as more recently along the Caribbean coast as far west as Índio. The Lesser Capybara is generally rare and secretive in Panama, often becoming active only at night especially in areas where it faces hunting pressure. However, ponds around Gamboa near the Canopy Tower are some of the best places to observe this species, and in the rainy season they can become quite plentiful and conspicuous.

Like their larger South American counterparts, Lesser Capybaras are always found near bodies of water, which they use to regulate their body temperature, to evade predators, to mate, and to forage for aquatic vegetation. They possess a number of adaptations to their semiaquatic lifestyle, including webbed feet. They are entirely herbivorous and will forage on grass and agricultural crops in addition to aquatic plants. They are usually found in pairs or in groups of up to 20 individuals in open areas. From a conservation standpoint the Lesser Capybara is classified as “data deficient” due to uncertainties over its distribution and population size, although it is known to face threats from hunting (for meat and hides) and from habitat destruction.