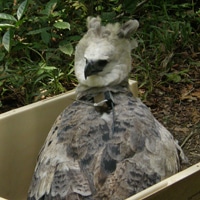 LV being released on Pipeline Road on March 9, 2009, photo by Jenn Sinasac

In late 2008, a young Harpy Eagle was shot in Darién.  Likely still in her nest tree, and being tended to by devoted parents who had spent over a year and a half feeding and nurturing the eaglet.  With much luck, she was rescued and hurried to Panama City where, under the diligent care of the Peregrine Fund biologists and veterinarians, she underwent surgery to repair her damaged wing.  The Peregrine Fund, an organization for the conservation of raptors, has studied Harpy Eagles in Panama for over two decades to learn more about these majestic birds.  When she gained enough strength, it was determined that she was a possible candidate for release.  She was fitted with radio and satellite transmitters and banded with a blue metal band with the initials “LV”.  She was released along Pipeline Road on March 9, 2009, and was under close watch by Peregrine Fund volunteers to ensure her continued recovery in the wild and overall wellbeing.  Months passed and LV grew stronger, eventually starting to catch her own prey and adjusting well to being on her own in her new home.  In 2011, her satellite transmitter was no longer producing readings, proving difficult to track her movements.  We could only hope the best for LV. 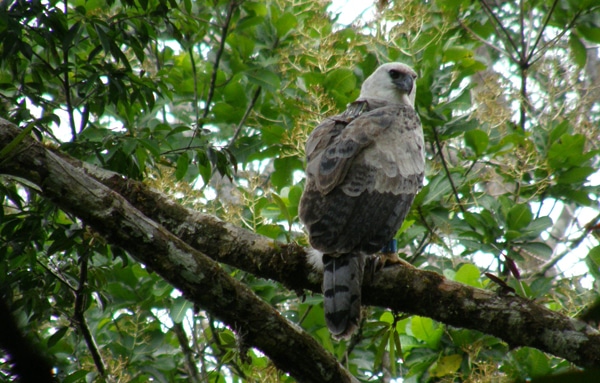 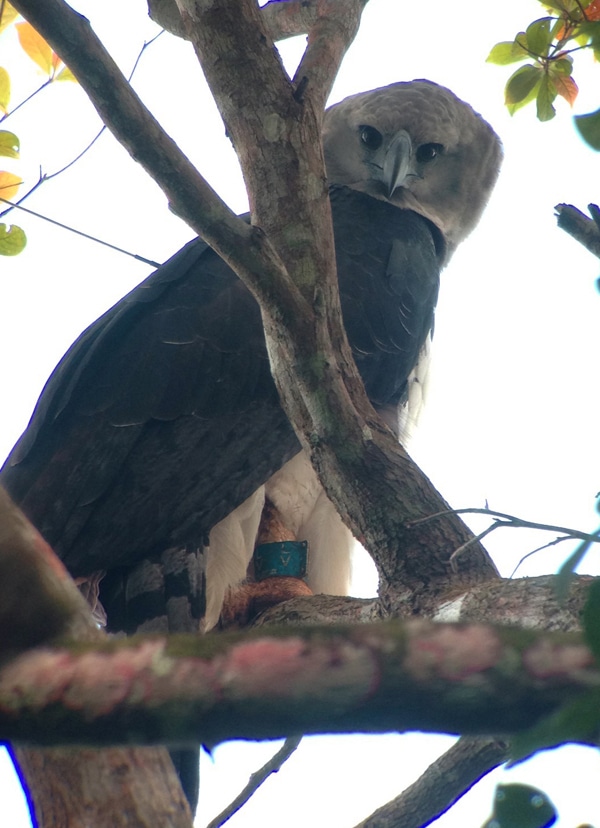 LV at the Canopy Tower on September 24, 2014, photo by Jenn Sinasac

Then, on the morning of September 24, 2014, our sharp-eyed driver Lorenzo Ibarra saw a VERY large bird fly and land in a tree beside the Canopy Tower.  Excitement filled the Tower as the guests and staff, including our resident biologist Jenn Sinasac, got great looks at a Harpy Eagle perched in the crown of the large tree.  Jenn saw that she had an antenna on her back from a radio transmitter and a blue band on her leg that read, “LV”.  Back in 2009, Jenn volunteered on the Peregrine Fund’s Harpy Eagle project.  She was there for her release and spent several months tracking her in Soberania National Park.  This eagle, affectionately named “Love”, was only 2 years old at the time of her release.  Now, five and a half years after her release, she is in full adult plumage and perfect condition, no indication of ever having a wing injury.  They watched her for two hours that morning, and when ready, she opened her massive wings and took off out of sight.  They continued to hear her calling on occasion throughout the morning, but she did not reappear.

On September 5, 2015, LV returned again, almost exactly a year after her last appearance at the Canopy Tower. She even perched in the same tree as last year!   She stayed for over an hour, perching on top of the crown of the tree during a light rain, in great view from the Canopy Tower windows.  When it stopped raining, she dried off in the sun for a moment before opening her large wings and flying north out of sight.  It seems like she likes to come by every once in a while to say hello. Thanks for the visit once again, LV!

Her visits are a wonderful surprise for our guests and staff at the Canopy Tower.  It is a great testament to the forest here, to be able to sustain a large forest eagle.  Even more, this eagle has a touching success story and we hope the best for her. 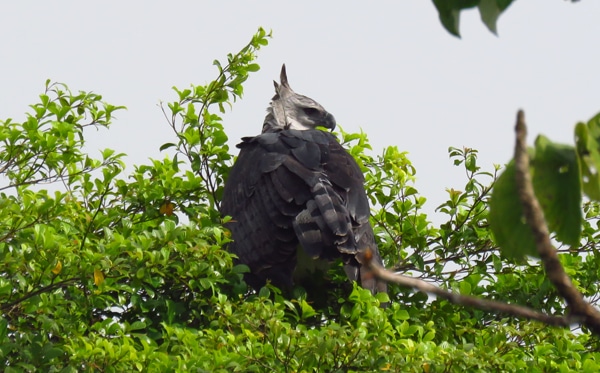