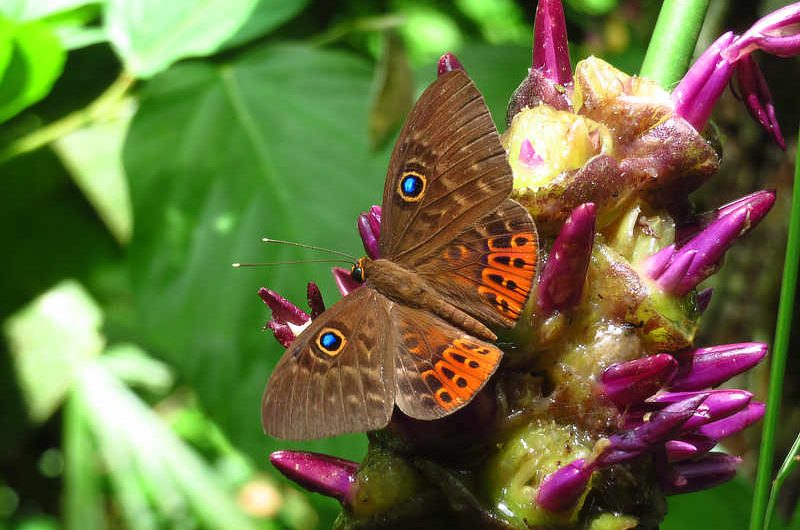 Also known as the Great Sheenmark, this is a large, recognizable member of the metalmark family, Riodinidae. At 30-35 mm, it is the largest of its genus in Panama. The Great Eurybia is distinguished by its large size and reddish hind wings. It has a reflective “eye” on each forewing, glowing iridescent blue, even in the dark forest understory. The “eyes” of males are much larger than those of females. The proboscis is very long—typically 1.5 times the length of its body—allowing it to access nectar deep in long flower corollas. This is an unusual characteristic, and is the longest of any butterfly.

Eggs are flattened, lozenge-shaped, and pale-green, turning white after a few days. Eggs are laid on stems, flowers or the base of the host plant. Maggot-like larvae are yellow with two brown patches on the thorax and have a dark brown head. They feed on the host plant flowers. Caterpillars secrete nectar from tentacle nectary organs to feed attending ants. Caterpillars are parasitized by wasps (Braconidae: Rogas spp.). The pupae are pale brown and are often near a temporary ant colony. The sheath enclosing the pupa may extend a full body length past the last abdominal segment.

Great Eurybias can be found perching on the undersides of large leaves. This is thought to be a preferred way to “launch” into flight. They have fast, erratic flight, and are usually solitary. They exhibit lek-like activity along natural boundaries such as streams and trails. Males fly in long sweeping loops around a host plant stand, often remaining airborne for several minutes. This is both for courtship display and territory defense.

The Great Eurybia is found in the forest understory and feeds on Calathea spp. (host plant), Crimson Passion Flower, Heliconia, Psychotria, Cephaelis and others. It can be found from sea level to 400 meters and prefers humid lowland rainforest, particularly in forest edge and treefall gaps where its host plant is in flower. It is typically encountered during the dry season, and its local abundance may vary greatly year to year. It ranges from Honduras to Panama, and this subspecies E. patrona persona is found in Costa Rica and Panama.