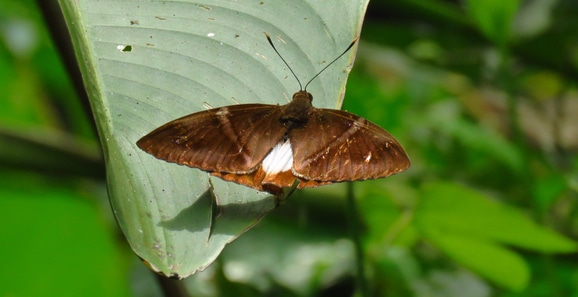 The Giant Butterfly-Moth is one of the most intriguing of Panama’s insects. This diurnal moth creates much confusion when it comes to identification—it is easily confused with butterflies, as it flies during the day and even has clubbed antennae! At close glance, the robust body is an indication you are looking at a moth.  This conspicuous, fairly large (wingspan 10 cm), daytime-flying moth is medium to dark brown in coloration with pale whitish lines on forewings.  On the hindwings, a white, heart-shaped marking is often covered by resting folded forewings.  Castniomera atymnius can be found commonly in the lowlands and foothills, where its larvae feed on Musaceae species.  Castniomera atymnius is the only species in the genus Castniomera, and is comprised of several subspecies throughout its wide distribution from Mexico to Brazil. Keep an eye out for these bold moths around all the Canopy Family lodges.

The family Castniidae (Giant Butterfly-Moths) is a small family containing approximately 170 species. Castniid moths are generally medium to large in size, having drab forewings with brightly-colored hindwings. They are found mainly in the Neotropics, but also have representative species from Australia and southeast Asia, where they are known as “Sun Moths.”