Glass frogs are appropriately named for the transparent skin on their belly, making their organs visible.  Fleischmann’s Glass Frog, also known as the Northern Glass Frog, is a small, delicate frog, 2-3.2 cm in length, with light green skin with yellow spots and fine black flecks.  It has a short, rounded snout and gold irises with horizontal, elliptical pupils, and its eyes point forward.  It has small suction pads on its toes.  In addition to its distinctive upper side, it can be best identified by its underside, in which a white sheet of guanine covers its heart, upper liver and also wraps around its digestive system.  Different species of glass frogs have different organs visible.

Fleischmann’s Glass Frog is found in the humid lowland, montane and subtropical forests from Mexico to northwestern South America.  It is one of the most widespread species of glass frogs.  It can be found in shrubs and trees along forest streams; it requires good vegetation growth, and is found in primary and secondary growth forest.  It is nocturnal and arboreal.  During the day these frogs hide on the underside of leaves.  At night, they emerge to feed and males search for mates.  They eat flies, spiders and other small invertebrates.

Male Fleischmann’s Glass Frogs are very territorial, and spend most of the year calling for females during a long mating season, from early March to late November. The males give a “wheet” call.  Older and more dominant individuals have louder calls.  If its territory is invaded, the owner will give a “mew” call in addition to its standard “wheet” call.  If the intruder persists, they will engage in physical combat until one is pinned down.  When a female approaches the male’s territory, the male gives both “mew” and “wheet” calls.  Females lay 18-30 eggs on the underside of a leaf overhanging water.  Both males and females guard the eggs during their development, and the males occasionally excrete “bladder water” on the brood to keep them moist.  They must be careful not to overwater them, which can make them more susceptible to fungal infections and predation.  When the tadpoles hatch, they fall into the water to continue their development.

Fleischmann’s Glass Frog is a complex of more than one species.  Species have been split off in Ecuador and Venezuela.  It is always a thrill to find one of these beautiful frogs near our lodges. These photos of the adults and eggs were taken in the garden of the Canopy Lodge. 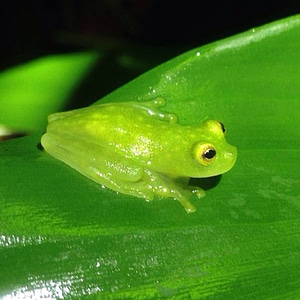 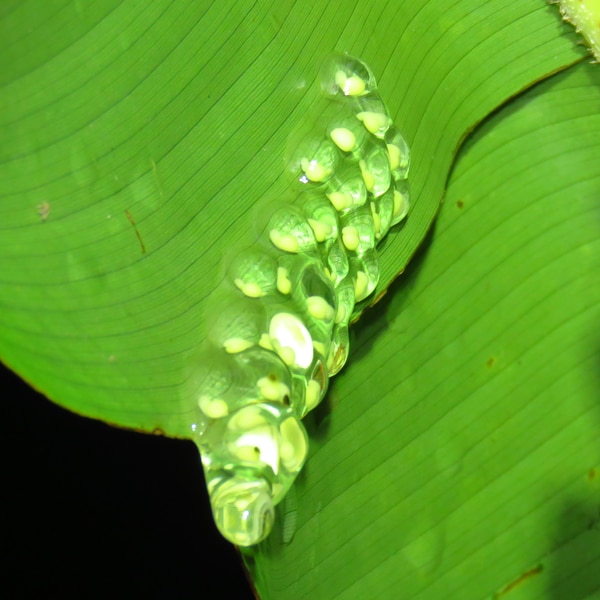