A very large forest eagle, similar in appearance to the even more massive Harpy Eagle, the Crested Eagle is one of the beautiful large raptors to grace the lowland tropical and subtropical forests of Central and South America. Averaging around 84 cm in length, the Crested Eagle is built for life in the rainforests—it has broad, rounded wings and a very long tail to help it maneuver through the forest canopy, very keen eyesight to detect tiny movements among the foliage, and powerful legs and feet with sharp talons to catch large prey. Due to its overall similarity to the Harpy Eagle, especially to the untrained eye, care must be taken in proper identification of these Neotropical birds of prey. The most distinguishing feature of the Crested Eagle is a single pointed crest on its head, unlike the Harpy Eagle’s wide floppy crest. The Crested Eagle has two color morphs, whereas the Harpy Eagle is monomorphic. The more frequent light phase is similar to the Harpy, blackish above and pale below, with a gray head, but has reddish barring on underparts. The dark morph has a blackish head and dark barring below. The Crested Eagle is distinguished from the Harpy Eagle by its barring below and lack of bold black chest present in adult Harpies. Also, the Crested Eagle has a proportionately longer tail, and the overall smaller size of the bird and girth of the legs will assist in telling these two large eagles apart. The juvenile is pale overall, very similar to a juvenile Harpy Eagle, and can be best distinguished by overall size and shape.

Like all raptors, females are larger than males. These Neotropical birds of prey feed on arboreal and terrestrial mammals and birds, as well as reptiles such as large snakes and iguanas. Monkeys and kinkajous are among common prey items taken. The habits of the Crested Eagle are similar to those of the Harpy Eagle; they are sit-and-wait predators who perch for extended periods of time in the forest canopy. Unlike Harpy Eagles, Crested Eagles will occasionally soar, singly or in pairs, over the forest canopy. This soaring is believed to be a hunting behavior. Pairs may have home ranges up to 100 km2 or more. They are solitary except when breeding. Crested Eagles are not overly vocal, but give a series of high-pitched whistles and alarm calls.

Crested Eagles are perhaps best studied when nesting. These Neotropical birds of prey have a reproductive ecology similar to that of Harpy Eagles. Nest trees are usually emergent over the forest canopy, offering a clear view of the surrounding areas. The nest is a bulky mass of sticks in the crotch of the tree crown. Once the eggs are laid, the female incubates while the male is the sole provider of food to the female and himself. Crested Eagles typically lay two eggs but only one young is reared. Eggs are dull white and unmarked. When the chick hatches, the female remains at the nest and the male brings the food for the first month, after which the female will start hunting as well. When the male brings food, he remains at the nest for only a few minutes, announcing his arrival with a whistle call. The female is the only parent that feeds the chick. The female will also shade the young chick in high heat and rain. The chick can stand by 30 days of age, and starts vocalizing by 40 days. The chick can begin to feed itself by 80 days of age and typically fledges by the time it is 110 days old. Once the chick fledges, it remains in the immediate vicinity and stays dependent on the adults for food. The chick will explore outside of the nest but return to the nest to be fed. Crested Eagle chicks remain dependent on their parents for up to 16 months, then eventually become independent. Therefore, Crested Eagles nest only once every 2-3 years.

Among the largest raptors in the world, the Crested Eagle is the only member of the genus Morphnus and forms a clade with the Harpy Eagle and the New Guinea Eagle.

Ranging from Guatemala and Belize south to Bolivia and northern Argentina, and throughout the entire Amazon basin, the Crested Eagle is rare throughout its entire range, occurring at very low densities, and is declining moderately rapidly due to habitat loss and hunting pressure. The Crested Eagle is considered near-threatened by the IUCN, but truly merits more attention to learn more about its population density in order to properly assess the status of this threatened species in tropical America. In Panama, these Neotropical birds of prey can be found along the entire Caribbean slope and in eastern Panama where suitable habitat is found. Since 2016, we have been working hard to locate and monitor Crested Eagle nests in the vicinity of the Canopy Camp in Darién, for the protection of the birds and for the viewing enjoyment of our guests. 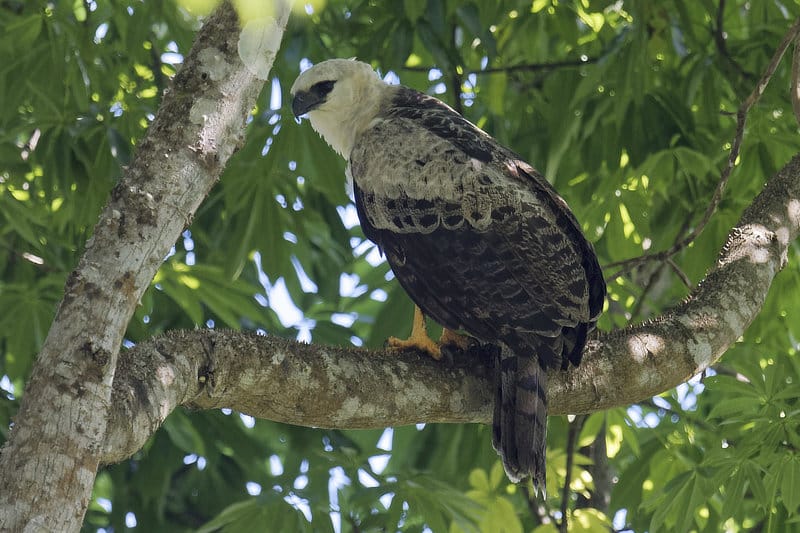