The Canopy Lizard is a diurnal, arboreal lizard of the lowlands and foothills of Central America and northwestern South America. It can be best identified by its medium size (body length 8-17 cm), extremely long, round tail up to 3x the length of its body, bright green coloration and a distinct spot or stripe behind the eye. It sometimes shows transverse striping on its body and tail.  It is variable in its color (Polychrus = many colors), and has the ability to change from bright green to dull brown depending on mood or conditions.

The Canopy Lizard lives up to heights of 40 m in the forest canopy. It makes slow and deliberate movements to climb and maneuver in trees and will often stay in one (sometimes awkward or bizarre) position for extended periods of time. It is capable of rapid movements if threatened. If disturbed, it will open its mouth and extend its dewlap wide. Canopy Lizards are insectivorous, but will also eat leaves, fruits, seeds and flowers.

The Canopy Lizard is rarely seen, but possibly overlooked. Occasionally we spot this interesting lizard basking in the treetops from the Canopy Tower, and the photo below was taken closer to ground level at Canopy Camp Darien.

Forest Iguana, Berthold’s Bush Anole, and Canopy Lizard are just some of the common names for this charming lizard—we think the choice is obvious which name we prefer! 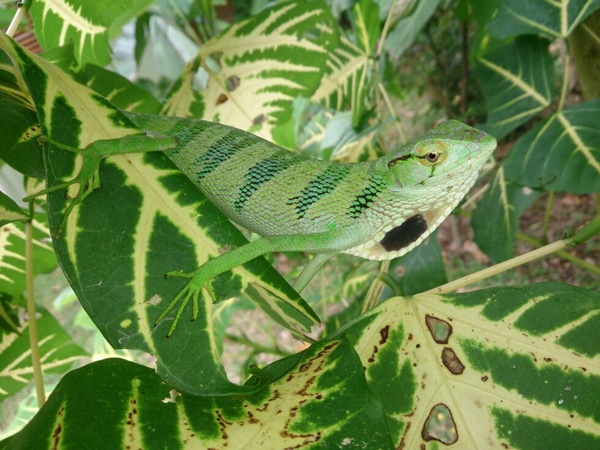