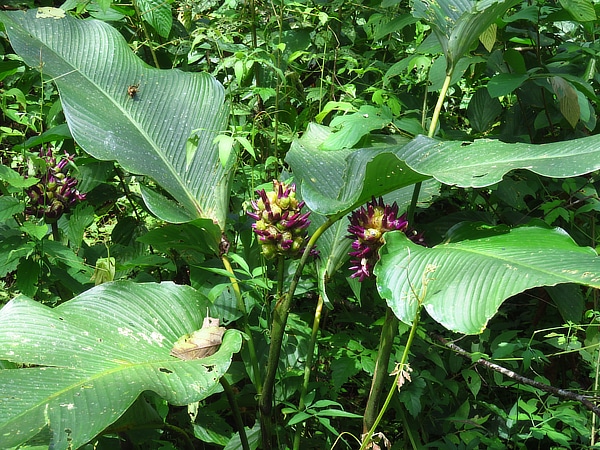 Locally known as “bijao,” Calathea latifolia is a distinct roadside plant of central Panama. Standing 1-2 meters tall, the Bijao plant is recognized by its large, thin, pleated heliconia-like leaves and purple inflorescences. It has flowers in pairs with as many as 13 pairs tended by a single bract. Seed capsules are approximately 1 cm long and contain 3 small seeds. The roots have large, edible tuber-like storage organs. Light purple bands on the underside of the leaf blade best distinguish this species. There is a cream-colored flower form, and this lacks the purple bands on the leaves.

Calathea latifolia flowers throughout the green season from July to December. Flower buds do not open until forced open by bees responsible for their pollination. They are pollinated by orchid bee Euglossa imperialis on Barro Colorado Island (Panama) and 2 other bee species elsewhere (from the genus Eulaema). Some bees are nectar robbers and do not pollinate the flowers. Fruits develop to mature size in about 2 months and are usually present in the same inflorescence throughout most of the flowering season. During the dry season, the Bijao plant dies back to the roots. Seeds are shed but do not germinate until the beginning of the following rainy season, an adaptation to dealing with the dry season conditions. Calathea latifolia is found in Panama, Colombia, Venezuela and Trinidad. In Panama, it occurs in central and eastern lowlands and premontane moist forest. The Bijao plant is common around the Canopy Tower, near Pipeline Road and along open roadsides.

Hailing from the widespread Marantaceae family, the genus Calathea has approximately 250 species and is the main genus of the family in the Neotropics. Many Calathea species are popular as potted plants; attributable to their decorative leaves and colorful inflorescences. Their large leaves are used for holding and wrapping items such as fish, and sometimes used in handicrafts for making bags and containers. The word “Calathea” is derived from the Greek word “kalathos” meaning basket or vessel, because of their use by indigenous people.