The opening of the Canopy Camp in 2014 was a pioneering event for birding and ecotourism in Darién, the far eastern province of Panama. The humid lowlands of Darién play host to a wide variety of sought-after birds, from the near-endemic Gray-cheeked Nunlet and Dusky-backed Jacamar, to the South American Spot-breasted Woodpecker and Black-capped Donacobius, to the rare and spectacular Harpy and Crested Eagles—all reliably seen on Canopy Camp tours!

To this day, however, the endemic or near-endemic birds of the Darién highlands remain rarely observed, confined as they are to a few remote mountains along the Panama–Colombia border. While I was in Panama working for the Canopy Family, I had decided to try to see as many of Panama’s endemic, near-endemic, and otherwise special birds as possible, and this aspiration necessitated a trip to the peak in the southeast of Darién, within Darién National Park, known as Cerro Pirre. In March of 2022, with the Canopy Family’s coordination and logistical support, I managed to arrange a five-night camping trip up to Cerro Pirre with Isaac Pizarro, the most experienced birding guide in the Darién highlands. 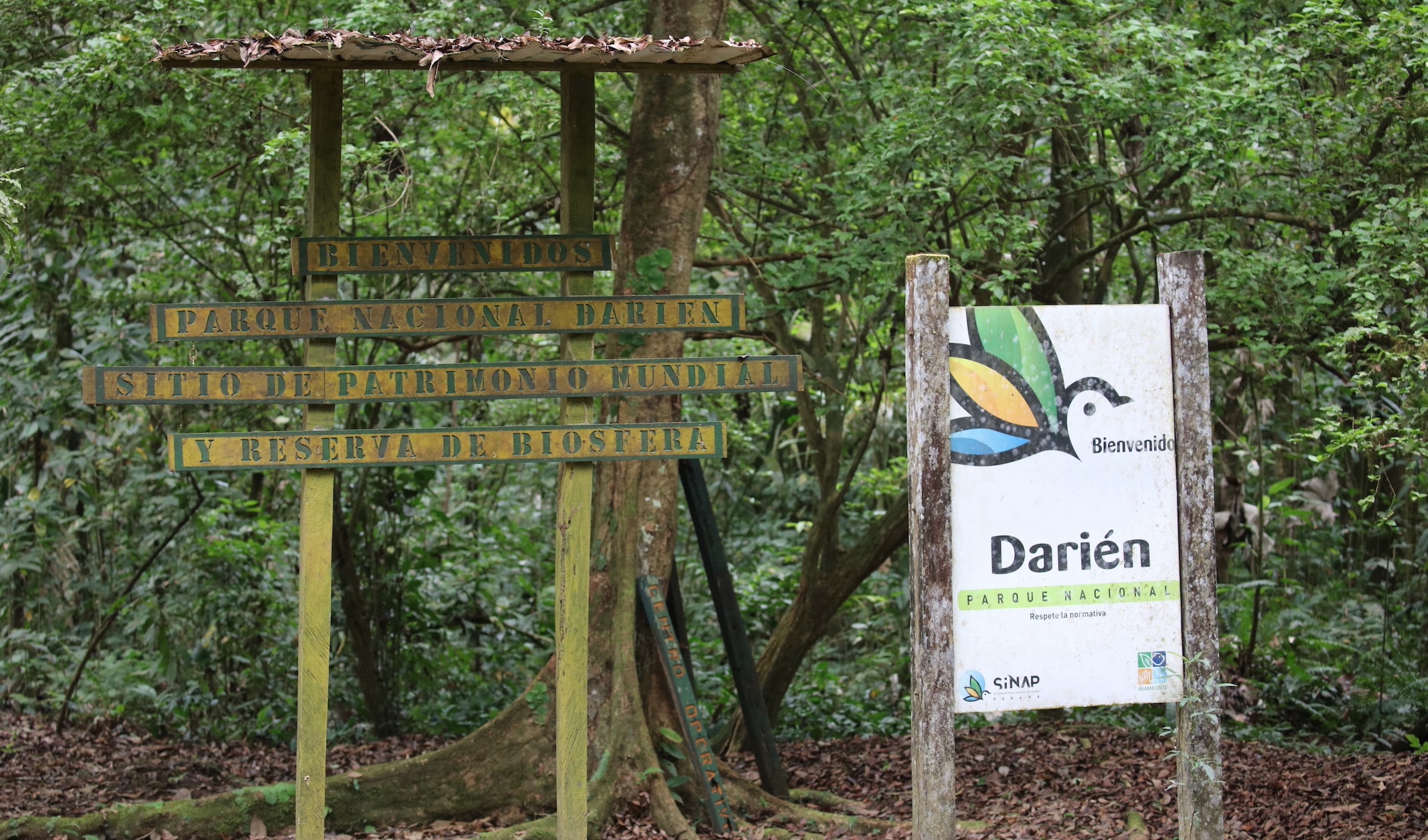 The entrance to Darién National Park.

On March 20 I departed the Canopy Camp and met Isaac in Yaviza, the famous town where the Pan-American Highway ends, interrupted by the Darién Gap. Isaac took us by boat to his hometown of El Real de Santa María, and from there we drove to the beginning of the trail into the Darién National Park, stopping briefly at a roadside colony of near-endemic Black Oropendolas. We spent our first night at the ranger station known as Rancho Frío, still in the lowlands and therefore not particularly frío, but conveniently equipped with power, running water, and satellite TV. Rancho Frío is much more frequently visited by birders than are the upper reaches of Pirre, as it is more accessible and provides access to some excellent lowland birding. Indeed, along the trail to Rancho Frío and in the vicinity thereof we found a number of interesting birds, including Yellow-backed Tanager, Double-banded Graytail, Brownish Twistwing, Lemon-spectacled Tanager, and Slate-throated Gnatcatcher. 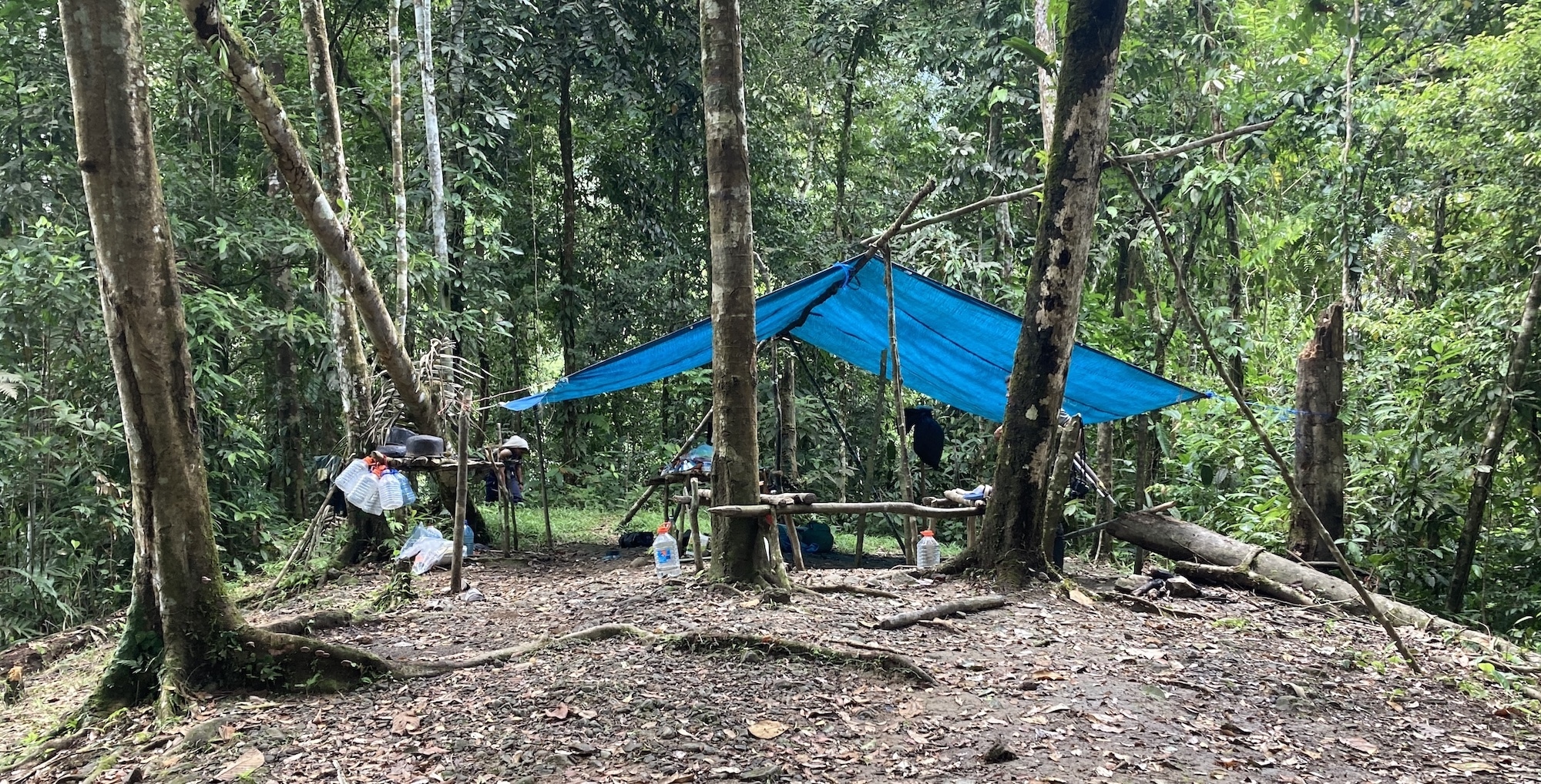 “Rancho Plástico,” around 600m asl, where we camped for our second and sixth nights.

The following day we hiked up to Rancho Plástico, which essentially consists of a plastic tarp extended over some logs. We looked for mixed flocks along the way and managed to see our first Scarlet-browed Tanagers, though not too much else. At Rancho Plástico, however, Isaac successfully located three special and often very difficult birds: Sharpbill, vocalizing in a tree right over the campsite, and Sapayoa and Wing-banded Antbird in a nearby ravine. At night Isaac spent some time looking for roosting Tawny-faced Quails, but we eventually decided to conserve our energy for the highland birds the next morning.

I had thought that the uphill walk from Rancho Frío to Rancho Plástico was rather challenging, but Isaac assured me that it was “very easy” compared to what was in store for the next day. On the morning of March 22 we climbed from Rancho Plástico (around 600m above sea level) to the summit ridge of Cerro Pirre (here, around 1200m). The trail was quite steep, at times ridiculously so, with the result that we rapidly gained elevation and entered the cloudforest habitat of the Pirre specialties.

As the forest ecology changed, we heard and saw our first Pirre Chlorospinguses and Varied Solitaires. At the summit, we found a perched Blue-fronted Parrotlet, a showy Choco Tapaculo, our first Pirre Hummingbird (a young male), Sooty-headed Wren, and the “Violet-throated” subspecies of Northern Emerald-Toucanet, among other birds. We spent much of the afternoon waiting by fruiting trees for the near-endemic Green-naped Tanager (split from the Spangle-cheeked Tanager of Costa Rica and western Panama), but it did not show this time. Nor did the Bare-shanked Screech-Owl, which we spent some time looking for after dark. Despite the rainy nighttime conditions, camping up at this altitude was made much more pleasant by the cooler temperatures!

On March 23, after another early morning attempt at the screech-owl, we continued along the summit ridge to an area that Isaac called Barranco Pelado. On the way I was thrilled to find our first Green-naped Tanagers and Russet-crowned Quail-Doves, as well as a Yellow-collared Chlorophonia, an adult male Pirre Hummingbird, and many Greenish Pufflegs. And in the afternoon, after setting up camp, we secured beautiful views of the Beautiful Treerunner, a near-endemic bird made all the more difficult by its apparent habit of associating with the vaguely similar but more conspicuous Lineated Foliage-gleaner (of the near-endemic subspecies tacarcunae).

Later in the afternoon we saw more Green-naped Tanagers and a distant Black-and-white Hawk-Eagle from our campsite, and finally, at night, we found our Bare-shanked Screech-Owl. As many of the special birds of the Darién highlands are obviously closely related to similar species in the highlands of Costa Rica and western Panama (e.g., Varied Solitaire and Black-faced Solitaire, Green-naped Tanager and Spangle-cheeked Tanager), I was half-hoping that this disjunct population of Bare-shanked Screech-Owl might turn out to be another species in its own right (Pirre Screech-Owl, perhaps). No such luck, according to current research, but it was an exciting find nonetheless!

By this point I had seen almost everything that I was hoping to see. The major outstanding target was the Pirre Warbler, split from Black-cheeked Warbler and found only on Cerro Pirre and Cerro Tacarcuna along the Panama–Colombia border. So on March 24 we continued on to the last known location for this bird, further along the ridge and about 1400m above sea level, known as Lámina, where we ended up staying an unplanned extra night. 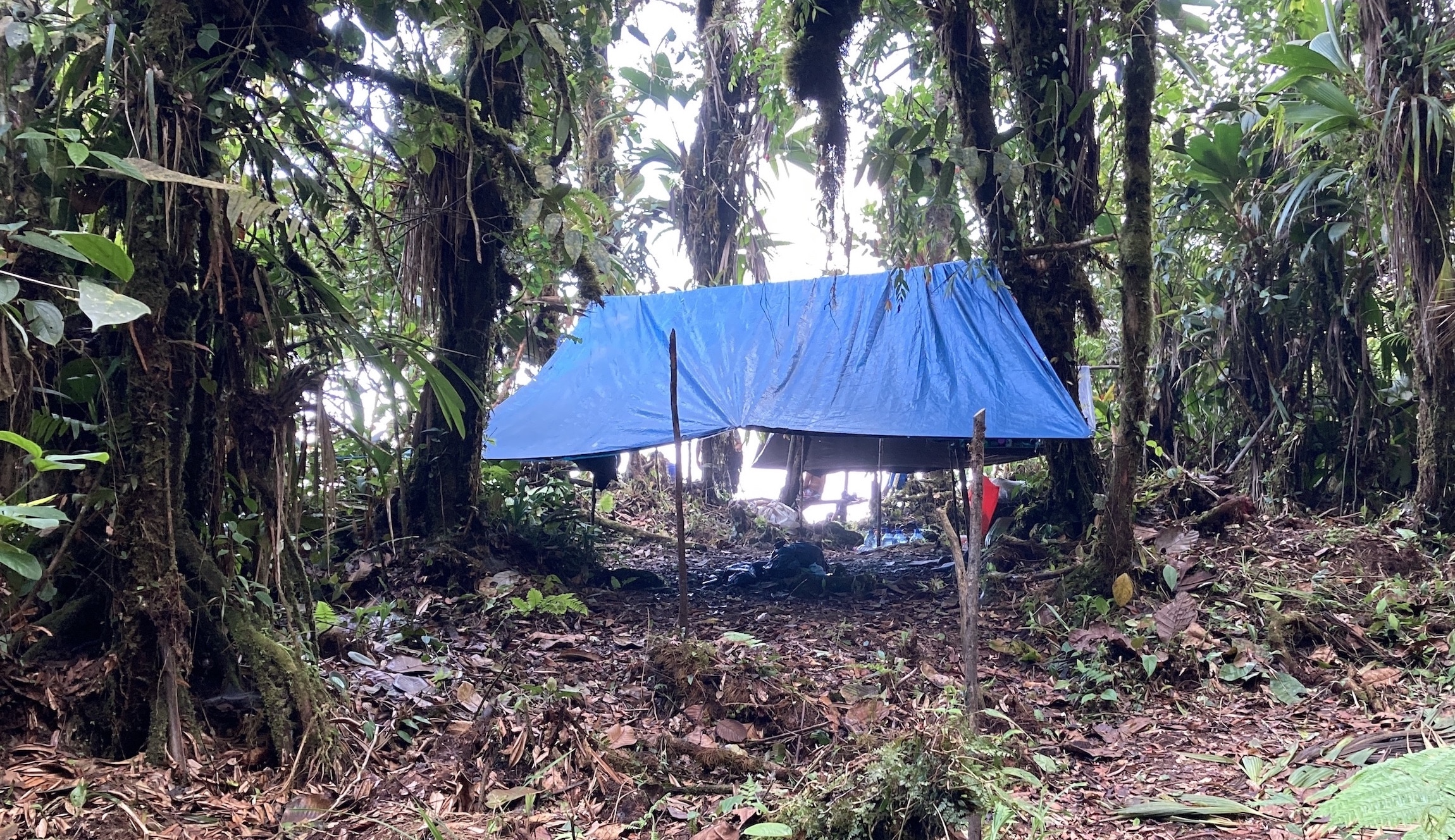 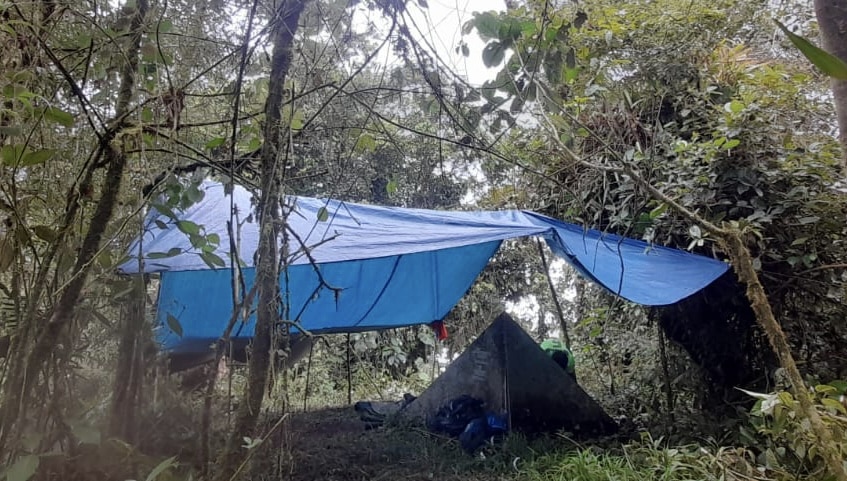 In brief, a day and a half of intensive searching in the Lámina area yielded many interesting birds—including Tooth-billed Hummingbird, Black-eared Wood-Quail, Scaled Antpitta, Rufous-rumped Antwren, and more Green-naped Tanagers and Beautiful Treerunners—but no Pirre Warblers. Once easy to see even at the first campsite along the summit ridge, over the last decade this species has gradually disappeared from every accessible site, such that Isaac himself has not recorded it anywhere for more than a year. Presumably (or at least hopefully) more time spent exploring suitable habitat further afield from Lámina would suffice to locate this bird, but this was not a task that I, starting to run low on batteries, contact lenses, socks, food, and patience, was well-placed to undertake.

Thus, we spent the afternoon of March 25 walking all the way back along the ridge and down to Rancho Plástico for our last night in the national park. We did manage to see two birds of particular interest. First, once we were back at Rancho Plástico, Isaac spotted a distant Harpy Eagle across a valley from a lookout point near the campsite. I had already seen this bird exceptionally well at a nest site near the Canopy Camp, but it was still exciting to come across one at large in the forest. Second, that night Isaac renewed his search for a roosting Tawny-faced Quail, this time successfully.

March 26 was our last day, but we still made time to explore some steep ravines around Rancho Plástico for more birds, notably Sharp-tailed Streamcreeper and Slaty-winged Foliage-gleaner. The walk down from Rancho Plástico back to Rancho Frío held out the potential for more important birds, especially the near-endemic Choco Tinamou and Viridian Dacnis, although we did not see either of these (more on these two species below). We did encounter the first other people I had seen in the national park other than myself, Isaac, and our porters—a couple of tourists from the Netherlands and their hiking guide.

As soon as we got to Rancho Frío for lunch it started to pour with rain (we had been very lucky with the weather for most of the trip), so we got out our umbrellas for the trip back to El Real, from there back to Yaviza, and from there to the welcome luxuries—including a shower and a bed!—of the Canopy Camp.

Slaty-winged Foliage-gleaner and Sharp-tailed Streamcreeper—both rare, hard to see, and even harder to photograph.

The many birding successes of this trip were all thanks to Isaac Pizarro, the undisputed birding expert of the Darién highlands, and to his team of porters, without whom the trip would of course have been impossible. Many thanks also to everyone at the Canopy Family for their indispensable support, especially Carlos Bethancourt, Danilo Rodriguez Jr., Abel Consuegra, and the staff of the Canopy Camp. Indeed, birders interested in the specialties of Darién, both highland and lowland, would be well advised to have the Canopy Family arrange an expedition to Cerro Pirre with Isaac in combination with a stay at the Camp, as they did for me.

The three that got away…

Of the restricted-range specialties that I had in mind to see, I saw all but these three.

Choco Tinamou (Crypturellus kerriae) Neither heard nor seen. According to Isaac, when the tinamous are vocal there is a chance to see them, but not otherwise. Most likely there is another time of year during which they are more vocal; Isaac promised to message me when he starts hearing them regularly again, so I can come back for another try.
Pirre Warbler (Basileuterus ignotus) Full account above.
Viridian Dacnis (Dacnis viguieri) Rare, and restricted to far eastern Panama and northwestern Colombia. We paid careful attention to the mixed flocks we encountered between Rancho Frío and Rancho Plástico but did not find this species among them.

The author descending from the summit ridge. Photo by Isaac Pizarro.