Last November, biologist Mark Stanback of Davidson College, North Carolina contacted us about a research project that he and his students hoped to conduct, focusing on the behavior of the Orange Nectar Bats that visit the Canopy Lodge hummingbird feeders after dark. Thanks to our livestreaming Panama Fruit Feeder Cam (a joint project between the Canopy Family, the Cornell Lab of Ornithology, and explore.org), Dr. Stanback and his team would be able to conduct their research entirely remotely! The Canopy Family and the Cornell Lab were excited to get involved; since then Dr. Stanback has worked with us to improve our feeder setup and to provide new insights into the nocturnal mammalian activity at the Lodge. Read on for Dr. Stanback’s account of the origins of the project, his research methods, and some interesting preliminary findings.

Although I am an ornithologist by training, I have a long-time fascination with bats. Last year I happened across the livestreaming Panama Fruit Feeder Cam at the Canopy Lodge at nighttime, and I was immediately enthralled by the Orange Nectar Bats (Lonchophylla robusta) that were visiting the hummingbird feeders. After that I would routinely check the livestream to watch the bats. Then, in November, I started wondering about the temporal pattern of visits to the feeder. Was the visitation rate relatively constant throughout the night? Did it vary seasonally? I realized that because Panama has only a single species of nectar bat, observations made at the Canopy Lodge were not confounded by the presence of multiple competing species of nectar bats. I also realized that I would be able to examine the foraging behavior of Orange Nectar Bats myself—from the comfort of my own home in North Carolina. Because the livestream allows one to scroll back in time up to twelve hours, I wouldn’t even have to wake up in the middle of the night to observe the bats feeding. Moreover, I could speed up or slow down the playback to make data collection even easier. I realized that this was a perfect pandemic project for both me and my research students. In mid-November of 2020, I contacted both Raúl Arias de Para, the owner of the Canopy Lodge, and the Cornell Lab of Ornithology, about getting permission to study the feeding behavior of the bats. Both Raúl and Cornell were enthusiastic and accommodating. The original plan was to collect data every thirty minutes for one night per week, but I soon realized that it would be easy enough to collect data even more frequently.

My first data collection was on 16 November 2020, when I recorded 211 visits between 1830 and 1840. Unfortunately, the feeder was nearly empty by 1840, so I was unable to extend the session into the evening. For the next several weeks, this was the pattern: the bats would feed hundreds of times early in the evening and then we would be forced to stop our observations when the nectar ran out. I reached out to Raúl, and we arranged for me to send a larger nectar feeder for use at the Canopy Lodge, in order to provide enough nectar at a time for the bats to continue feeding later into the night. Once data collection spanned the entire night, and was occurring most nights a week, it became clear that observing the feeder twice an hour (for ten minutes each time) was simply too time consuming. Starting in mid-December 2020 we limited our observations to ten minutes per hour (at the top of the hour). Additionally, we separated our counts in the first and second five-minute intervals during each watch, in order to document the regularity of visits to the feeder.

One trend that quickly became apparent was that early evening feeds declined dramatically starting in mid-December. Whether this was a cause or a consequence of the food lasting all night was unclear, but feeds occurring from 1900–1910 went from the hundreds to essentially zero. At the present time (in late February), bat activity begins around 2000 and remains plateaued at about ten visits per minute from midnight to 0500.  We are curious to see whether this pattern remains consistent in the coming months.

Another issue that became apparent was that Orange Nectar Bats are not the only nocturnal mammalian visitors to the fruit feeder. Common Opossums (Didelphis marsupialis) visit the platform regularly to eat bananas or whatever they can get from the ever-present orange rinds. To avoid introducing bias into our bat feeding data, we would shift our 10-min observation period if an opossum was on the platform at the regularly scheduled observation time. Although it was clear that bats were willing to feed during opossum visits, it appeared anecdotally that the feeding rate did decline when an opossum was present. My students and I decided to test this hypothesis statistically, and on 20 December 2020 we started counting the number of feeding visits by bats during any opossum visit we observed. Because we knew that bat visits changed over the course of the evening, we would compare the number of bat visits with an opossum present on the platform to the number of bat visits to the feeder in an equal time interval immediately prior to the arrival of the opossum. To further standardize our data, we converted all of our data to feeds per minute. We excluded cases where there were zero bat visits either prior to or during the opossum visit, but that still left over 200 paired observations.  A paired t-test demonstrated that the bats do significantly reduce their feeding rate in the presence of opossums. This suggests that bats are definitely aware when a potential predator is within a meter of the feeder, but are not so frightened as to avoid feeding entirely. Because this result is presumably less affected by season, one of my students is currently writing up these results as a manuscript for publication.

We plan to continue our observations in 2021. I am intrigued by the possibility that the heavy early evening use of the feeders in 2020 was a consequence of them becoming empty by mid-evening. Were bats shifting their preferred feeding schedules to take advantage of a temporary food resource? If so, this would be unexpected behavioral flexibility. With the help of the staff at the Canopy Lodge, we hope to address this question in the coming months! 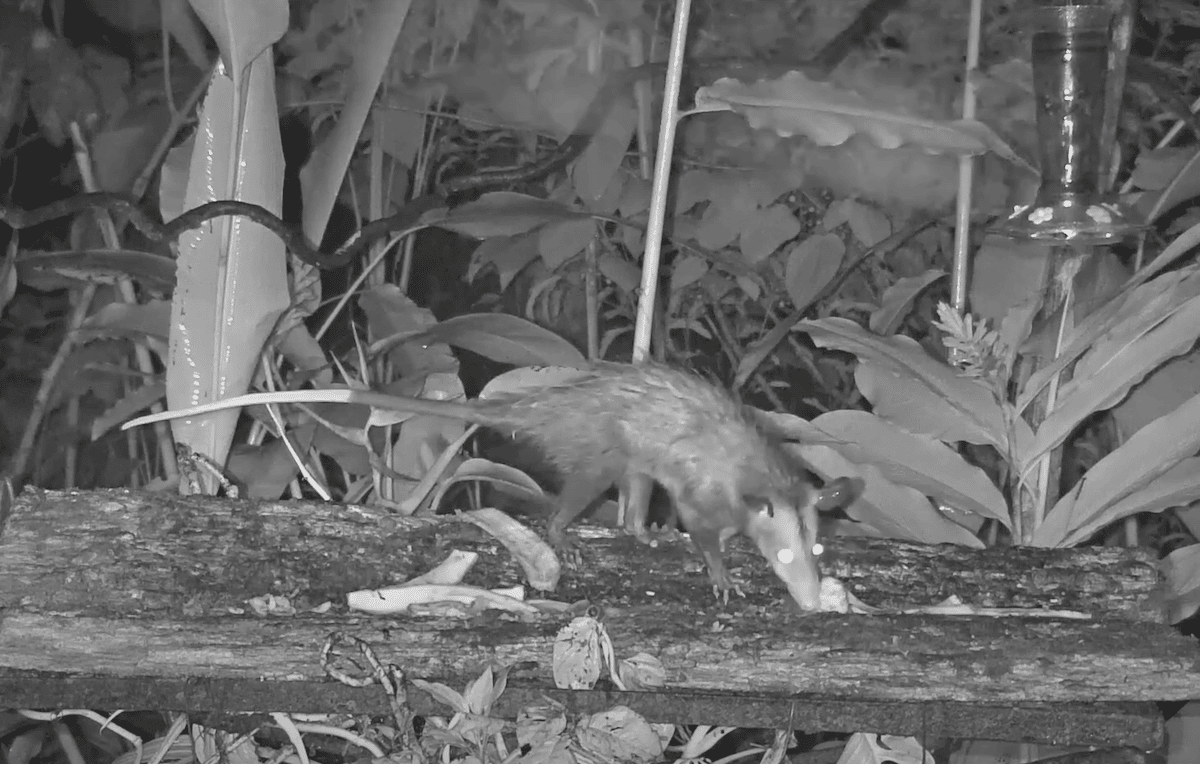 Common Opossum, as seen on the Panama Fruit Feeder Cam.