The noted biologist Dr Thomas Lovejoy remarks in the foreword to the book Tropical Nature that rainforests aren't, on first appearances, the reservoirs of diverse and colourful life that they are sometimes made out to be. His first impression on going into a rainforest just outside Belem, in Brazil, was that it is very green, quiet and still. "Little moved except ants," he wrote. I reckon this is bang on - a first visit to a rainforest can be a desperate anticlimax. Where are all the colourful birds and flowers and the extraordinary mammals that you've read about? But then you learn a few basic techniques - crane your head up, and you'll start to see some of the more exotic bird species - toucans, parrots and motmots, for instance; peer into the undergrowth and listen out for rustling noises, and some of the more subtle (but sometimes strikingly beautiful) antbirds, antwrens and antpittas appear. But mammals, in most cases, remain frustratingly out of sight. This is for a number of reasons. The majority are crepuscular or nocturnal by nature, and so you won't see them in daylight. Most don't want to be spotted, the minute they get a whiff of you (long before you've whiffed them), they're gone. As Lovejoy said, "Most animals are occupied in not attracting attention." So, when I visited Soberania National Park, I was surprised by just how many mammals we did see, particularly considering the park entrance is just a 45-minute drive from Panama City's main international airport. Capuchins screamed and threw sticks at us from the treetops, agoutis calmly sniffed the air on forest tracks, and even sloths did more than you might expect. One evening, we were stopped in our tracks by the sound of something crashing through the undergrowth in our

The noted biologist Dr Thomas Lovejoy remarks in the foreword to the book Tropical Nature that rainforests aren’t, on first appearances, the reservoirs of diverse and colourful life that they are sometimes made 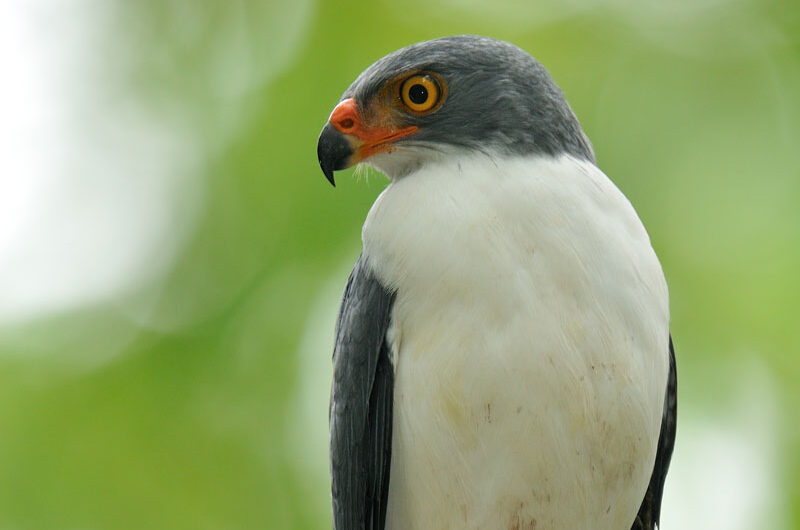 Semiplumbeous Hawk Leucopternis semiplumbeus Photo by Cedric Ng The Semiplumbeous Hawk is a medium-sized raptor about 15 to 16 inches tall.  Its back is uniformly dark grey or “plumbeous,” meaning lead-colored.  The throat, chest & belly are pure white on adult birds but, on immatures, the chest shows very fine grey streaking.  The relatively short, dark tail has two white bands, one at mid-tail which is quite conspicuous and another at the base which is often concealed.  The legs, cere and the base of the bill are orange.  The underside of the wings is whitish. This hawk may easily be mistaken for other raptors, especially “light phase” Short-tailed Hawks (Buteo brachyurus), which have yellow ceres (not orange) and do not show broad white tail bands, and forest-falcons, like the Slaty-backed (Micrastur mirandollei) and Collared (Micrastur semitorquatus), both of which have noticeably longer tails. The Semiplumbeous Hawk uses the “sit-and-wait” hunting technique, whereby it patiently perches quietly about 20 feet high and slowly scans for prey.  Another interesting hunting technique employed by this clever hawk is to follow troops of White-faced Capuchin Monkeys (Cebus capucinus).  While the frolicking monkeys forage through the forest canopy, they disturb other creatures, including lizards, which are then caught by the ever-vigilant hawk.  A rather sneaky technique indeed!  Small reptiles are on the menu, including Whiptail Lizards (Ameiva spp.), geckos, anoles and small snakes. This raptor prefers the interior humid forests of eastern Panama and the Caribbean slope of the Canal.  Interestingly, they are seldom seen soaring high like other hawks, but are often spotted streaking across the forest just above the canopy layer.  They may be observed perched up on the canopy or lower on an exposed perch. This resident and spectacular hawk is often found along Pipeline Rd., where the photo above was taken. It

Semiplumbeous Hawk Leucopternis semiplumbeus Photo by Cedric Ng The Semiplumbeous Hawk is a medium-sized raptor about 15 to 16 inches tall.  Its back is uniformly dark grey or “plumbeous,” meaning lead-colored.  The throat, chest

Sapayoa Sapayoa, photo by Carlos Bethancourt The Sapayoa (Sapayoa aenigma) is an elusive bird of the pristine forest streams of the foothills of eastern Panama.  It is a small (14 cm, 5.5 in.) olive-yellow, flycatcher-like bird with a yellowish throat and crown patch.  It has a broad bill which it uses to snatch up flying insects as it sallies from a perch.  Sapayoas live in the lower levels of the forest, almost always along streams.  They are most often seen in pairs and often join mixed feeding flocks with other understory species.  Large, messy hanging nests made from grasses and vegetation are strategically placed 1-2 meters above a stream.  The entrance to the nest is often covered with a leaf.  This range-restricted species can be found from eastern Panama into northwest Colombia and extreme northwestern Ecuador.   As its name "aenigma" suggests, the Sapayoa is somewhat of a puzzle to taxonomists and its placement has been debated for quite some time.  It is an evolutionarily interesting species; once classified with manakins, with the behavior of flycatchers, it now is placed in its own family, Sapayoidae, and is believed to be most closely related and the only New World representative of the lineages of the Old World broadbills (family Eurylaimidae).   A most sought-after species indeed, and Panama is one of the best places to find this range-restricted species.  It is one of the target species for our Birds of Canopy Camp Darien birding tour, and please contact us if you are interested in specifically seeing the Sapayoa.   Searching for Sapayoa... On September 2, 2014, our team of guides (Carlos Bethancourt, Moyo Rodriguez, Domiciano Alveo and Jenn Sinasac) set out on a search for Sapayoa in the foothills of Nusagandi on the eastern Caribbean Slope of Panama.  Canopy Family resident

Sapayoa Sapayoa, photo by Carlos Bethancourt The Sapayoa (Sapayoa aenigma) is an elusive bird of the pristine forest streams of the foothills of eastern Panama.  It is a small (14 cm, 5.5 in.)