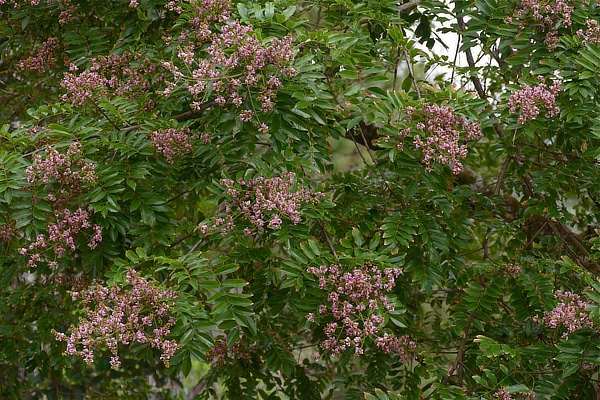 Named for the pungent odor given off by its bark, the Cabbage Bark Tree grows tall, up to 35 meters in height and up to 70 cm in diameter (on occasion larger to 1 meter or more), and is distinguished by its straight, cylindrical trunk, usually unbuttressed or forming small buttresses. It is evergreen and the bark is smooth and gray. It has a large, dense crown of shiny dark green leaves with clusters of fragrant purplish-pink flowers. Leaves are compound, alternatively arranged, 15-40 cm long with 7-17 leaflets. They have a stipel (a tiny, pointed stalk) at the base of each leaflet. Flower clusters are 16-60 cm long. The bell-shaped calyx is 3-5 mm long with 5 small teeth, the corolla is 12-15 mm long, and deep pink to purplish in color. The fruit is a pod containing 1 seed, fleshy on the outside.

A member of the legume family, Fabaceae, Cabbage Bark is very widespread, found primarily in riparian areas in forests along rivers; also roadsides, pastures and woodlands. It is tolerant to a wide variety of conditions, habitats, rainfall and soil types. Flowers are self-incompatible and are obligate outcrossers (meaning flowers must be fertilized by pollen from a different tree), requiring pollination by insects, particularly bees and butterflies. When blooming, it attracts insect pollinators, and is a source of nectar for bees and birds. Bats are the main seed dispersers. Its many-branching crown offers suitable places for epiphytes, mosses, ferns and orchids to thrive. It has a symbiotic relationship with bacteria in the soil—bacteria forms nodules on the roots of the tree, which fix atmospheric nitrogen. Some is used by the tree, and some is distributed and used by other plants growing nearby. The very hard wood is resistant to fungal and termite attacks.

Cabbage Bark is a very useful tree—the desirable hard wood is used for lumber for constructing bridges, railroad tracks, docks, poles, furniture and boats. It is used in soil conservation projects to protect watersheds, and as a shade tree in coffee plantations. The bark contains various alkaloids that reportedly have narcotic, laxative, purgative and anthelmintic (anti-parasitic) properties, and is used in traditional herbal medicine by indigenous shamans and healers in Central and South America. The inner bark can be used to treat snakebite. The fruit is edible with caution, but the bark and seeds are toxic. The smoke from burning the wood, if in contact with eyes, could cause blindness.

Cabbage Bark is native to southern Mexico through Central America and northern South America, and widely introduced throughout the Caribbean, Florida and Africa. In Panama, it is found throughout the country, and is a characteristic tree of tropical dry, tropical moist and premontane moist forest, from sea level to 900 meters (although more commonly to 400 meters in elevation). In Panama, in the right moisture conditions, flowers and fruits may be seen throughout the year, but primarily in late dry and early rainy season from February to May. Most fruits mature in mid to late rainy season, September and October.

Did you know? The Cabbage Bark is locally known as harino and almendro del río in Panama.